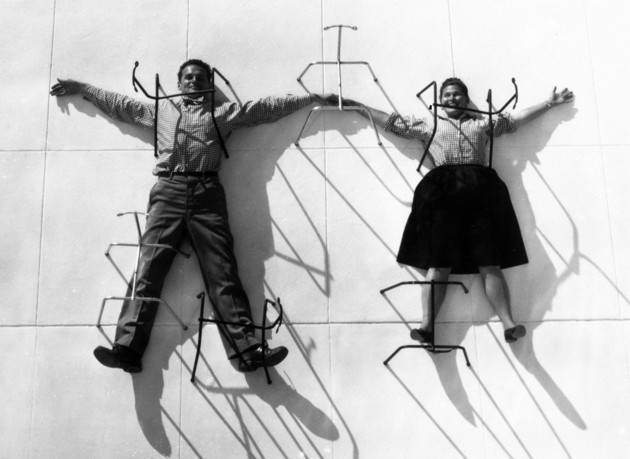 Him: Ivy League style with a bow tie; Her: a short fringe and bun, flared tunic dress and Peter Pan collar. Charles and Ray Eames remain for posterity the fusional couple depicted in a quirky, cheerful portrait as if pinned to the ground by the metal structures of their chairs.

Their studio in Venice Beach was a catalyst for their diverse skills in architecture, film, photography, set design, graphic design, furniture design and even games design, which they took very seriously, but in 30 years, the Eames, who also collaborated with Eero Sarinen and Harry Bertoia, created more than 20 different types of chairs.

Their approach to design favoured experimentation as means of constant improvement – Charles Eames said that the moulded plywood chairs were the result of a “flash of inspiration,” but above all a flash that lasted 30 years! Not to mention the major role of serendipity in their work – an opportunity, a concept or the technical detail of an object that could generate another. Thus, the Plywood Group series was the culmination of experiments carried out for the American army on splints and stretchers moulded under heat and pressure.

Thanks to their innovative organic shape and slightly flexible backrests, the unrivalled comfort of these unpadded chairs earned the LCW chair in this series the distinction of “chair of the century,” awarded in 1999 by Times Magazine.

Bel Oeil is on the lookout for vintage models produced since 1946 by Herman Miller.