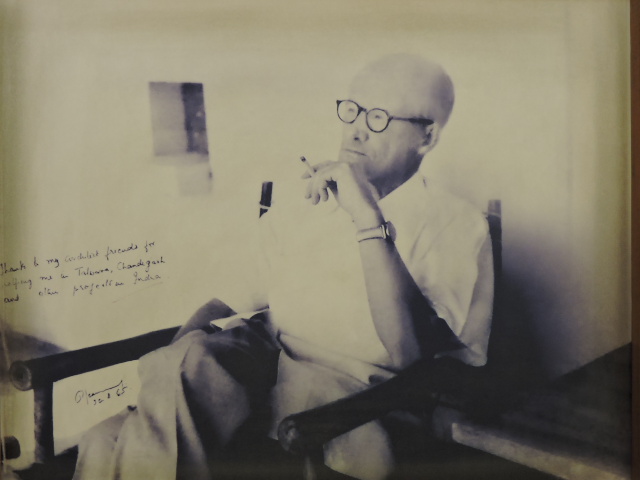 Pierre Jeanneret is the cousin of Charles-Edouard said Le Corbusier and in the photographs where they are both, we are troubled by a kind of mirror effect: 10 years separate them, a few centimeters and the choice of their eyeglass frames, but no divergence when Pierre Jeanneret leaves in 1923 the Perret to follow his elder in his Paris studio. The 1920’s were prolific in large-scale projects in which elements of the Corbusean architectural language were formalized with the mythical Villa Savoye in 1927.

In 1928, with Charlotte Perriand and Le Corbusier, he conceived the famous avant-garde series of LC, declined in armchair, table, stool, chaise longue and lockers. He prolonged this collaboration on various projects of rationalized and an industrialized habitat with the participation of Jean Prouvé. Having designed an architectural office focused on the need to respond by emergency structures to the destruction of war he also developed the technique of both prefabricated and light furniture with Georges Blanchon. In the United States he designed furniture for Knoll before settling for 15 years in Punjab to complete the pharaonic project entrusted by India to Le Corbusier to design the capital Chandigarh and several ranges of teak furniture; willingly assimilated to low cost furniture, not reissued but now scattered, their rating increases dramatically on the international market.

The personal reputation of Jeanneret, who died in 1967, grows as evidenced by the exhibition dedicated to him by Atelier Jespers in Brussels in 2017 and Bel Oeil will occasionally be able to offer you vintage pieces outside the LC series reissued in Cassina’s I maestri collection since 1965.